I am not a social gamer. More games are becoming about being social, forcing people to play in groups, this is the opposite of what I want when I play a game. I want to be alone, to play alone and not have to consider the needs, wants and personality flaws of other players. I already have enough, more than I desire, social interaction in my life.

Where can the anti-social gamer find a place in social gaming? - Found this post today. It was the only one I found, so far.

If players don't enjoy the game and leave, they will be left with a sour community of anti-social people anyway. Anti-social isn't just people who don't want to be chatty, it is also people who are jerks and bullies.

I've logged into AQ3D once since the kicking thing with the Lich map. I didn't feel enthusiastic about continuing to play and I didn't stay logged in very long. I've played other online games which became full of bullies who seemed to live to defeat other players, especially new players who were easy to destroy. Some of those games made new players untouchable for a period of time, so they could build up their character. But the bullies were right there the minute the time was up.

AQ3D was different in the early days. It was a polite, friendly community. Adding kicking to the game has likely finished it, jumping the shark. I won't delete my account but I'm certainly not going to force myself to play and I no longer feel part of the community there. Which is interesting considering I have felt a part of the community there until now. Yet I have always played alone, side by side with other players who wander in and out, co-operating to achieve goals. In the social gaming now they are all out for themselves. Often deserting when things don't work out easily or perfectly. That was aggravating, this kicking thing is just plain nasty and I'm surprised Artix supports and encourages it. But, that's how it is.

Kicking in AQ3D is Spoiling the Game

Just sent this note to support. I am feeling pretty disappointed in the game these days. This being the second time I have felt this let down I have decided to not make a decsion until after Frostval. But, Frostval will have to be pretty damned amazing for me to spend money on the set this year.

The kicking other players thing is out of control. I have been asked to kick people for no reason at all and I always vote no. Only once was a player absent or frozen but they were back in action before the kicking vote threw them out. I had voted no so I don't think your system is even working right. Last night I spent a few hours getting to level 31 so I could do the new Lich map. I was looking forward to it. But, the first time it seemed to glitch, I'm not sure, I just suddenly ended up in the basement of the other map. Maybe that is how it works. It was the first time I had tried it and I was just trying to figure it out and then it was over. Second time I tried the Lich map I made it to the end (I guess it is the end) when the Lich is a skull. At that point as I was hitting the skull the other players kicked me out. I was far from inactive, not frozen. There had been no communication in the game, just kicked me out right at the end. Players should not be able or allowed to do that to other players. I have had several other experiences with jerks in this game but far more in recent years than the beginning. Also, I like playing solo, it is how I unwind when I am stressed. But, more and more I am unable to manage the quests, like sewer parkour, the Tengu feather map and I probably won't try the new Lich map again. It seems impossible to do alone and I'm not keen on trying with other players again. I have spent $300 over the years playing AQ3D, probably more. I started playing in alpha and I played Battleon years and years ago. I am a long time supporter of the Artix games. It does make me feel sad to consider not playing any longer. But, between quests/maps I can't manage to do without getting my nephew to do them for me or just skipping them and now the kicking thing from other players I don't think I can justify spending more time and money to support this game. I am going to see how things go with Frostval this year. It is usually my favourite season in the game with the snowy artwork and new wardrobe to buy. I know this is a long note, without paragraph breaks, I am typing with one eye covered due to an infection and just hoping I catch all my typos. I don't think the kicking thing is working as it was intended. I have only seen it used negatively and it is making the game very inhospitable and unfriendly. Not a community feeling at all. Best wishes, Laura.

Thank you for contacting Artix Support.

The kick player option in dungeons is completely optional and it is up to that group to decide what they would like to do. If you do not agree with the group you are in or feel like they are kicking you for no reason, we suggest switching groups. There are no issues that have been reported or that we are aware of with this feature.

However, if you keep getting kicked and the other players aren't stating the kicked you, this may be a connection issue. We suggest trying all of the options in our help page - I'm having a technical issue with AQ3D via Steam!

There are unfortunately specific dungeons, battles, etc that can't be soloed and were created to battle through with a group. If you do come across players that are breaking the rules, please make sure to report them in game. Here is our help page for more information - AQ3D In-Game Report System.

That's either a lie or Artix support is completely ignoring the problem. I have seen at least 3 video posts about the player kick being a problem (and I haven't gone looking for them).If the player kick is an optional feature where do I turn it off?

Wearing most of the Royal Dragon Rider set. The Fairy Dragon Knight helm because I didn't want to cover my pretty blue face. Also, the invisible belt because I don't like how so many of the belts hang down in front or stick out in front. Berserker War Axe, I have one with flames but this one suits the purple outfit better. I also brought out the golden dragon pet again. 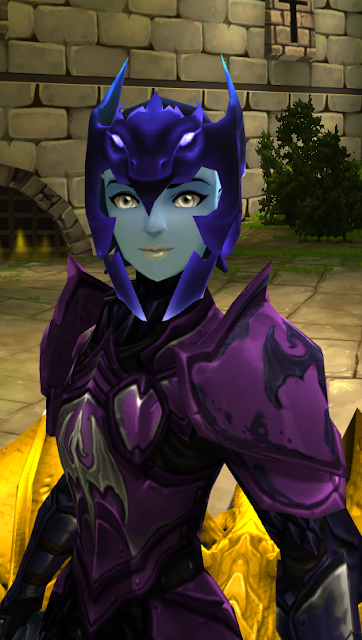 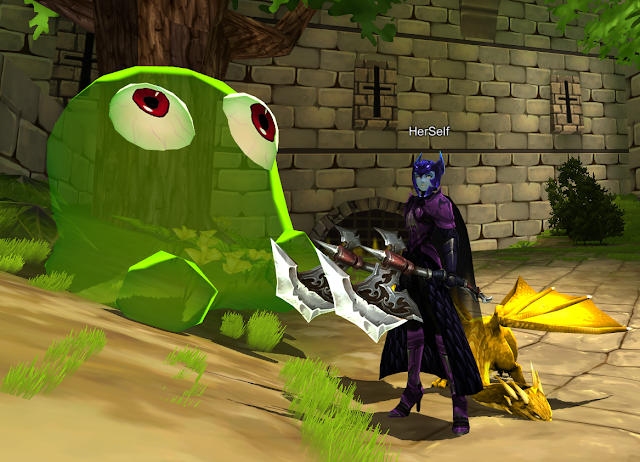 Fishing in the Sewer 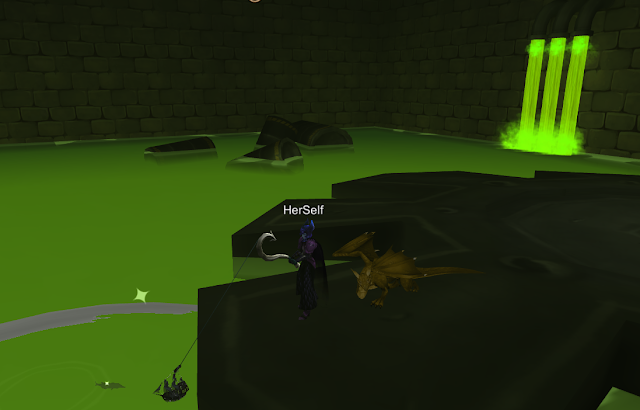 I thought I wasn't going to get into the sewer for fishing. But, I went back in for the third or fourth time in a row and I was on the beam overhead instead of the parkour course. All I had to do was kill a few trolls (I admit I didn't really look at what they were) run along the pipes to the last section and wait to get to the boss. Once he was gone I was left to fish. He didn't come back, which I was glad for. I hope this will work again. I got the legendary, epic, all of the fish but I need more for the quest which turned up when I left the sewer.

These are all the parts of the Artix Direworlf set which I have so far. I keep meaning to look it up and see how many parts there are, particularly if there is a main armour because that would help pull it all together, outfit wise. I think it is the last piece I need to finish the set now. (I haven't checked to be sure). There may be a sword (probably not an axe, but that would be better). 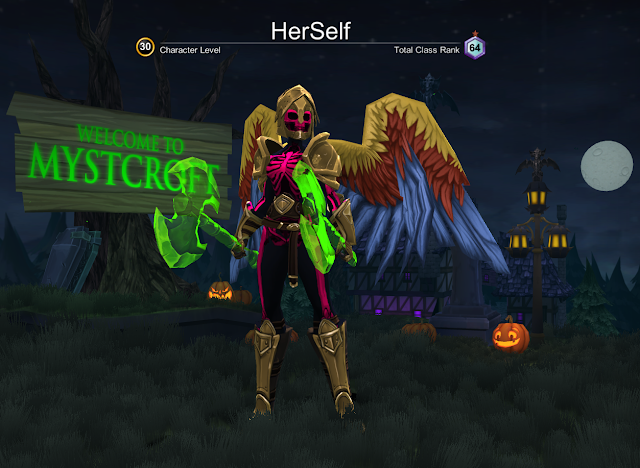